I am going to start with a little background information about myself… “my journey” …and my motivation for choosing my topic today:

My father, as my mother explained to me years later, “lost his faith” when I was 7. From then on I was raised in a household where the only thing worse than organised crime was organised religion.

There have been a few times in my life when it felt like my whole understanding of everything was tipped out and landed in a heap on the ground… this was one of them.

After being introduced to Unitarianism by my husband, Dave, I have been fortunate to spend the last 30ish years of my spiritual journey with YOU. With YOUR support, I have felt the freedom to openly look at spirituality from many different angles, exploring and finding my connection again with the divine…

I spent 3 years as a child, from 7-10 years old, in Tonga. My father was a Peace Corps doctor there. A substitute for the missionary work he’d planned to do before he “lost his faith.”

During a return visit as an adult to Tonga with friends and family, I accidentally found myself saying: “When I was Tongan…” instead of “When I lived in Tonga…” and I realised then that that was how I’d felt. It was while living in Tonga that I began to establish a sense of who I was. To develop my sense of self identity and to understand how I fit in the world… Where I belonged…

As parents, Dave and I took our children, Adam and Sarah, to Cambodia. I knew from before I even had children that when I did, I would want to take them somewhere to live where their perceptions about what is “OK” would be expanded… just like mine had been in Tonga. I wanted them to understand that people don’t have to wear the same kinds of clothes, live in the same sorts of houses, eat the same kinds of foods or speak the same languages to all be “OK.”

While I searched for a life partner and someone to be the father of my children, I sought someone who would be willing to go with me… to take our children to faraway lands where they would have valuable, formative experiences… similar to those I’d had… that would also expand their perspectives. So they would not be judgemental…

I thank GOD I found Dave…

Dave and I served in Cambodia as volunteers with the American Friends Service Committee, a Quaker organisation. When we left the US for Cambodia, I had just received my Masters of Science degree in Midwifery from the State University of New York in Brooklyn. All of my clinical training had been in 2 big city hospitals in the Bronx.

After 10 years of practising as a physiotherapist, and feeling quite empty or depressed… I engaged in some very helpful counselling with a wonderful Unitarian friend in Augusta, Georgia named Barbara Wise. Barbara is my “other mother”. She helped me to acknowledge the fact that I had been a victim of incest… emotional as well as physical incest… That I had been sexually abused by my father. That I had been like the “other woman’ to my mother… So even though she had loved me as her daughter, she resented… even hated me.

Barbara helped me start to reconnect with who I am as a spiritual being. My life force energy was running very thin before I started working with her and I hadn’t known why. I thought I’d just inherited defective mental health genes from my mother and was “doomed.” With Barbara’s support, I decided to follow what felt like my calling and re-tread myself to become a midwife… in this lifetime.

Barbara was the midwife who helped me give birth to my authentic self.
After graduating from Midwifery school, and not knowing how I was going to survive in the medicalised US obstetric arena… Dave and I, Adam and Sarah… went to Cambodia.

While Dave and I fulfilled our roles with AFSC, I also arranged to work alongside a local Khmer midwife… With her assistance, I was able to care for a few, very marginalised, pregnant women I met through our work with disabled people. I was able to provide the women with care… while continuing my learning journey as a fledgling midwife…

It was during our 2.5 years in Cambodia, that we added our son, Vibol or Will to the family.

Dave and I contemplated where we would go after Cambodia. I wanted to go where I could be supported to practice midwifery in a way that would be congruent with my heart. As I saw it, the 2 options were either The Netherlands or NZ… And as I didn’t speak Dutch, we decided on New Zealand.

When I agreed to do this service, I knew immediately what I wanted to talk about… A founding principle that has guided me through my whole life… At least what I can remember of it… What I have come to refer to as: The 11th Commandment.

I would have sworn growing up that “Thou shalt not judge” was one of the 10 Commandments. And I was shocked to find out as an adult that it was not… so I just decided to add to the original 10 and make it the 11th. =o)

Mother Teresa summed up where I am coming from this way: 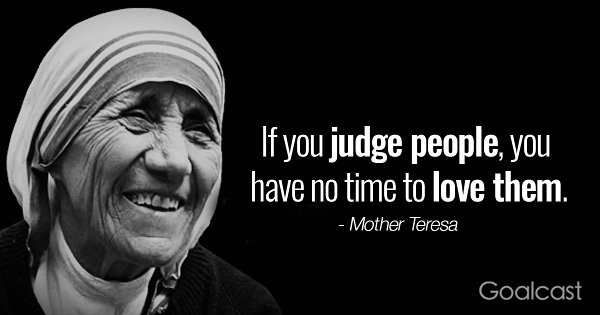 Thinking about and preparing for this service has proved to be a very interesting exercise for me. I’ve ended up doing a lot of self-reflection.

I’ve had to realise that we all make judgements… all the time… and that’s normal and “OK”.

When you cross the street, you look both ways and decide whether to continue walking. That’s a judgement.

At its core, a judgement is an opinion or a decision based on thoughts, feelings and evidence. We make hundreds of them every day. It’s how we function in the world.

I judge my children…, I judge myself, I even judge Dave…

According to corporate image consultant and personal brand strategist, Anna Hinson, “Within the first seven seconds of meeting someone, our brain makes 11 different decisions about them including their intelligence, socioeconomic status, education, competence and trustworthiness.” This is a subconscious process people cannot control.

There are both negative and positive judgements…

If you saw someone give food to a homeless person, you would instinctively make a positive judgment about his or her character.

Judging only becomes a problem when we make unnecessary, hurtful or unfair judgements based on little evidence…

Can you think of examples when others have judged you in ways that were hurtful?

Have you ever judged someone in an unkind way and then realised that your assumptions were wrong? …I think we all have…

So, why have I always felt that it is so important to avoid negative judgements? …Because I know that how “I” feel depends on how “I” choose to be… and if “I” am preoccupied with being judgemental and critical, “I am shutting myself off from divine energy flow and the possibility of REAL, POSITIVE connections… connections that are ACCEPTING and CONSTRUCTIVE…

I believe that in order to have a positive impact in the world, to feel like I have value and self-worth, I need to connect with the parts of people that I feel are positive…. That my soul is simpatico with…

Granted, with some people, it is hard to find that simpatico, common spiritual ground. It’s easier to criticise, to judge harshly or to point out the negative. Anyone can put others down… But what is the joy in that? For anyone…?

Off and on, I attended a Christian church in Taranaki… Because I loved the people, their music and singing, the worship of something good and greater… and I always felt better after attending their services… even if I didn’t always “agree” with every detail. I often cried as I felt the songs of praise and worship, sung with open hearts and compassion, fill an emptiness within me. I needed to love and accept MYSELF, to feel WORTHY and acknowledged for the beautiful being that “I” am. I needed to come to terms with the divine essence within ME that is here on Earth to love without restraint.

…In order to feel like I had permission to believe in a creative Universal force or “God”… I felt like I had to come up with a rational explanation for what “God” is. This is how things worked with my father. Stupidity was not tolerated…

He was a very “intelligent” man, good at debates and insistent on logical rationale for… EVERYTHING.

Who knows what entropy is?… Any scientists out there? Raise your hands… Can someone explain?

For those who don’t know… it is the natural tendency for things to become more random… more disconnected, more dissociated. Like if you put a drop of dye in a glass of water, the dye spreads or disperses and eventually becomes so randomly distributed that the whole glass is just tinged with the colour of the original dye. That is caused by a natural force that happens on its own. Right? It’s a force like gravity… that just exists…

Well, obviously there is an opposite force that brings things together, organises things and helps them to grow and reproduce… Otherwise we would not be here. We would not exist… There would be nothing living at all, anywhere… But there is! That force, the organising force that is opposite to entropy, is what I have come to understand and give myself permission to believe… is: GOD.

So what does that have to do with my 11th Commandment? What I somehow always knew, from my own personal experience or conviction, to be an essential guiding principle to live by… ?

Again, as Mother Teresa put it:

In making all of my relationships and encounters with others, whoever they are, wherever they are, whatever their circumstances… as positive as possible… I believe I will lie down on my deathbed with a calm mind and a comfortable heart… becausee in the end, it was not all about me and them, but about me and GOD…

I want to close with the following: 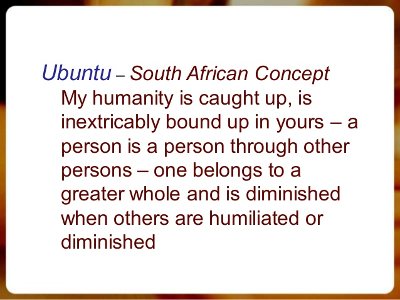