A flame within a chalice is the symbol of Unitarian Universalism.

“At the opening of Unitarian Universalist worship services, many congregations light a flame inside a chalice. This flaming chalice has become a well-known symbol of our denomination. It unites our members in worship and symbolizes the spirit of our work.

The flaming chalice combines two archetypes—a drinking vessel and a flame—and as a religious symbol has different meanings to different beholders.” – Dan Hotchkiss

The lighting of the chalice is accompanied by a reading.

History of the Unitarian Chalice:

The symbol had its origins in a logo designed by Austrian refugee Hans Deutsch for the Unitarian Service Committee (USC) (now the Unitarian Universalist Service Committee) during World War II. According to USC director Charles Joy, Deutsch took his inspiration from the chalices of oil burned on ancient Greek and Roman altars. It became an underground symbol in occupied Europe during World War II for assistance to help Unitarians, Jews, and other people escape Nazi persecution.[1]

“Living in Paris during the 1930’s Deutsch drew critical cartoons of Adolf Hitler. When the Nazis invaded Paris in 1940, he abandoned all he had and fled to the South of France, then to Spain, and finally, with an altered passport, into Portugal. There, he met the Reverend Charles Joy, executive director of the Unitarian Service Committee (USC). The Service Committee was new, founded in Boston to assist Eastern Europeans, among them Unitarians as well as Jews, who needed to escape Nazi persecution. From his Lisbon headquarters, Joy oversaw a secret network of couriers and agents.”

After 1941, the flaming chalice symbol spread throughout Unitarianism in America and the rest of the world. This spread continued after Unitarians in North America merged with Universalists to form the Unitarian Universalist Association. The symbol gradually became more than a printed logo. By the 1960s, people like Fred Weidman of Dearborn, Michigan, were making flaming chalice jewelry. Some congregations began displaying the symbol in their worship spaces. At some point, three-dimensional chalices were made to be lit during worship services, but the origin(s) of this usage remains obscure. 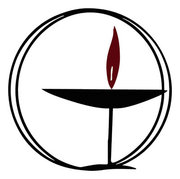